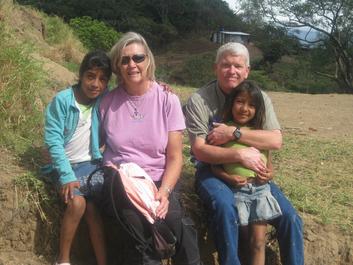 Inception
Love At Work, Inc., a 501(c)(3) private foundation, was formed in 2001 by Larry and Carole Prible after years of serving with Habitat for Humanity International in the growing awareness of housing as a critical foundation for breaking the cycle of poverty.

For years, the Pribles devoted themselves to annual working pilgrimages with volunteers to build in communities that desperately needed decent housing.  Their children and grandchildren have been a big part of the ministry.

The Pribles led groups to inner cities and rural towns. They built in Mexico, Korea, Watts in LA, Appalachia, the Philippines, Hungary, South Africa, New Zealand, El Salvador, Honduras, and Belfast, Northern Ireland. They traveled to 14 countries and were involved and supported the construction of over 1200 homes.  In 2000, the Pribles brought their campaign back home and combined it with the activities surrounding the Indianapolis 500 Mile Race, putting the spotlight on their hometown’s housing needs.

Expansion
They first began working in Costa Rica in 2004.  Embracing a broader community development model, they began addressing the needs of education, health and nutrition, youth ministry as well as housing. The first student scholarship program was started three years later in response to the needs of hundreds of children living in the nearby shantytowns.  In 2009, they formed Love At Work Ministries (LAWM), an independent 501 (c) (3) public charity, to expand the global outreach programs.  Although the Love At Work Foundation and Love At Work Ministries are not formally affiliated, the Foundation has been a major source of funding for LAWM's programs.

Today
Through our work and that of organizations supported by the Foundation, thousands of low-income families have found new hope in the form of education, housing, health and nutrition, economic opportunity, spiritual and social development.  Individuals, churches, community groups and others have joined together to successfully tackle significant physical, mental, social and spiritual problems in their communities.